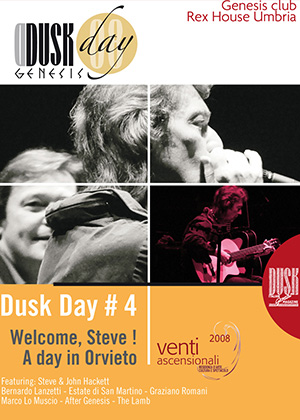 Dusk Day is the annual Italian Genesis fan meeting, organized by the self-named fanzine together with theGenesis club Rex House Umbria and the association Venti Ascensionali.

For their fourth meeting in 2008 they organized a truly memorable tribute gig inviting some great Italian names: the historical progsters of Estate di San Martino, keyborder Marco Lo Muscio (here he plays tracks by Steve Hackett and Rick Wakeman with a the pipe organ inside the stunning dome of Orvieto!!) the intellectual After Genesis, the rocker Graziano Romani, former PFM vocalist Bernardo Lanzetti (nowadays in Mangalavallis), and one of the best Italian Genesis tribute bands, The Lamb from Rome). All playing their very own homage to Genesis, reinterpreting their most famous tunes and also some own material.

But the most important guests of this evening surely where John and Steve Hackett, that have entertained an enthusiastic crowd with a dozen of their classics, played in acostic version. This DVD shows nearly two hours of the live gigs of that magic evening, including the complete gig of John and Steve: Not to be missed by fans of Genesis!

Royalties of this DVD will be entirely given to the AMREF fund.