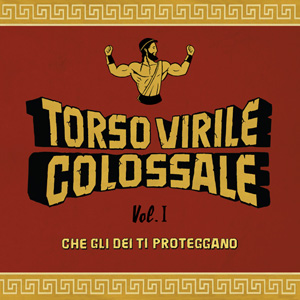 “Vol. 1 – Che gli dèi ti proteggano” is the unexpected album from an unpredictable artist. Behind the pseudonym ‘Torso Virile Colossale’ (literally: Manly Colossal Torso) we find Alessandro Grazian, born in 1977, author of several solo albums, producer, composer of soundtracks and painter / illustrator: a project that was born in 2008, but that actually began to materialize only several years later, years of deep study of the material which this album is based on: the so-called “Peplum” or “Sword and Sandal”, an Italian cinematographic sub-genre of historic costume films set inside a mythological contest, mainly produced in the 1950s and 1960s. Not only music and arrangements, but also illustrations and the album graphic layout are the fruit of Alessandro’s work.

“Che gli dèi ti proteggano” consists of 12 instrumental tracks (not by chance as many as the legendary Labours of Hercules) that have no philological intentions with respect to the symphonic works that characterize the original soundtracks of the genre, but actually want to be an ideal fusion between the epic and solemn worlds of this cinema, the soundtracks of the ’60s and a more contemporary aesthetic that revolves around electric guitars with open tunes, all played by Grazian, proto-metal, stoner and psychedelic suggestions.

The aim at the root of the project is to evoke the world of these films through some harmonic solutions and some timbral elements (timpani and brass) but at the same time to transpose everything in a different flavor by creating some short circuits. The imaginary is both vigorous and dreamlike, with the intent of being a sonorous landscape for mighty heroes, fascinating ladies, tyrannical cruelties, gladiators, oppressed tribes and pure action. The atmosphere and the songs tiles are dense with such elements as fights, gods, oracles, seductions, the marches of the ancient armies and much more. The “Vol. 1” prefix in the title of the album means that, in the intention of its creator, this is only the first step in a larger project.

Alessandro Grazian has taken care of the album production, together with Antonio ‘Cooper’ Cupertino, one of the most active Italian producers and sound engineers, who recorded and mixed the album at San Pedro Studio in Milan.

Among the various guests involved in making this record we have:

MARIO ARCARI: a classical, contemporary music and jazz musician, historical collaborator both in studio and live of Fabrizio De André, Ivano Fossati and many other important Italian artists

NICOLA MANZAN: a multi-instrumentalist with many collaborations, founder of Bologna Violenta, a musical project in balance between grindcore and avant-garde metal

ALESSANDRO PERISSINOTTO: timpanist and percussionist, collaborator of the Verdi Orchestra of Milan