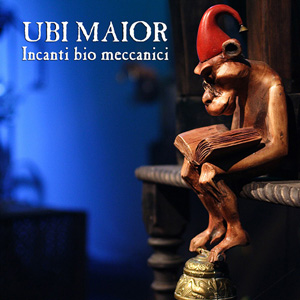 5 years since their last album Ubi Maior come back with their third opus “Incanti bio meccaninci”. The new guitarist Marcella Arganese has shifted the dynamic of the band from a dark-dye hard-prog rock to a more usual italian symphonic rock. But if their previous effort “Senza tempo” highlighted a quest for originality, avoiding too easy comparisons with the “giants” of the seventies which arose from the good first CD “Nostos”, this new work shows a clear search for uniqueness both lirically and musically.

The two long suites “Teodora” and “Lo specchio di Mogano” (“The Mahogany Mirror”) (more classic the first, more surprising the latter), which open and close the album, if on one hand they borrow an usual song structure of the progressive rock genre on the other hand they possess a great melody power that makes the listening enjoyable and engaging. The sound is more open compared to the past and the keyboard player Gabriele Manzini (main writer of the band) has managed to achieve a great sound-balance playing classic sonorities: Hammond organ, minimoog, piano, mellotron. The singer Mario Moi (playing also violin and trumpet) performs perfectly, with energy and passion, his own lirycs based on books of imaginary cities. The two tracks in between “Alchemico Fiammingo” (“Alchemical Flemish”) and “I cancelli del tempo” (The Gates of Time”) represent the most surprising aspect of this great album, showing an oniric and evocative succession of atmosphere changes, from soft and suffused reflections to powerful and magic progressions. Four tracks for four charming and musically ambitious stories.

Unmissable CD for all the italian progressive rock fans!