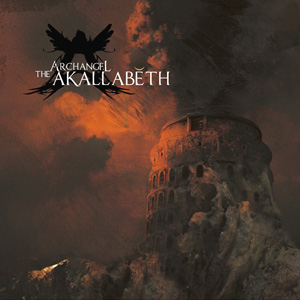 1.Gift of love
2.The Forbidding
3.The Shade of Numenor
4.See Myself in You
5.Rings of Power
6.Raise the Sword
7.Power Within
8.The Faithful and the Faithless One
9.Red Clouds War
10.The Downfallen: 39 Days of Madness
11.Lidless Eye
12.The Price

Behind the Archangel monicker hides Gabriele Manzini keyboard player and main writer for Ubi Maior and former keyboard player for The Watch from 2000 till 2005. The Akallabeth is his first solo CD and it is really a special one! It is a concept album based on J.R.R. Tolkien’s The Fall of Numenor, a tale taken from The Silmarillion, the cosmological book of Tolkien’s world. The music has been composed during the last couple of years and the lyrics are faithful to the original story.

If many Tolkien-inspired recordings have been released by extreme metal bands or, on the contrary, by pastoral and sometimes soporific ensembles, there’s always been few classic rock albums inspired by the works of the creator of The Lord of the Rings. Gabriele Manzini decided to fill the hole. The twelve songs are perfect example of british classic-rock with many progressive-rock and hard-rock influences and some folk inputs. The story tells the last days of the island of Numenor and the ruinous end of the island itself. The story has many charachters and so many singers are involved in the project in order to give a greater reliability.

The CD features three important guest-stars:
– Damian Wilson, singer for many bands and artists of the prog-rock and prog-metal scene: Threshold, Ayreon, Rick Wakeman, Landmarq…
– Zachary Stevens, singer for the sympho-metal heroes Savatage from 1993 till 2000, and now frontman of Circle II Circle
– Ted Leonard, singer for the prog-rock band Enchant from USA with many acclaimed albums.

Beside these special guests there are other important singers and musicians from the italian progressive-rock scene: Francesca “Elayne” Naccarelli (vocals, Dunwich), Ettore Salati (guitars, ex-The Watch), Marco Schembri (bass, ex-The Watch) and others.
The CD is produced by ARCHANGEL himself and mixed by The Watch’s producer Simone Stucchi.
Released in jewel box with outside cardboard sleeve.