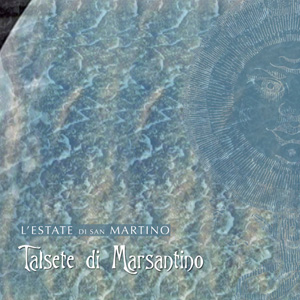 L’Estate di San Martino is finally back with a marvellous third album, which is usually defined as the ‘maturity’ one for a band. This particular ensemble was actually founded in 1975 in Perugia, Italy, but only able to release a 7″ single in 1978 before disappearing. Only in 1983 they started to play live again, and one of those live performances was released in 2006 as “Alder”.

Now, five years after “Febo” (2007), “Talsete di Marsantino” is finally available: an almost completely instrumental album, mainly based on great acoustic arpeggios and electric solos, keyboard soundscapes and beautiful flute and sax inserts. Even if practically avoid of lyrics, the album is a concept that whould be listened while reading the notes in the booklet, telling about Talsete, an imaginary character, an archivist whose aim was to collect and preserve human knowledge and who fronts his greatest ‘battle’, against the passing of time ad memories.