TALES OF LOVE AND BLOOD 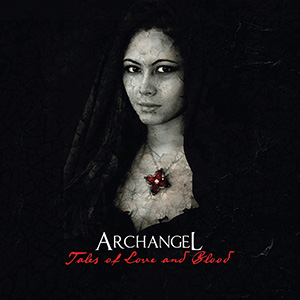 1.Ouverture: frozen torment
2.When the night
3.Nosferatu
4.Misplaced love
5.The night scythe
6.The black bride
7.My only love
8.In loneliness
9.Wheels of confusion

Behind the ARCHANGEL monicker hides keyboard player Gabriele Manzini, composer and main writer for Ubi Maior (1998-present) and former keyboard player for The Watch (2000-05). The Tolkien inspired work “The Akallabêth” was his first solo CD, released in 2009.

The new album “Tales of Love and Blood” is a progressive-gothic rock masterpiece. It represents an important step forward in terms of production and composition. This time Archangel shifts his musical style from the hard-progressive-folk of the first album to a new kind of gothic-prog rock, with references to gothic-metal and to the new wave of the ’80s.
“Tales of Love and Blood” is not a concept album even though a general theme surfaces every song which are gathered in three greater suites:
– Countess Báthory Suite (based on the dramatic story of Countess Elizabeth Báthory);
– The Following Suite (a classic horror tale based on a necromancer and his follower);
– Love and Blood Suite (ghost stories full of melancholy and nostalgia).

Two important cover songs are nested like precious gems inside the plot: “Nosferatu” by the seminal and mystic hard rock masters Blue Öyster Cult and “My Only Love” from the refined British heroes Roxy Music. A third and totally reworked cover is set at the end of the work as a bonus track, since it eludes the general theme of the album: “Wheels of Confusion” from the metal pioneers Black Sabbath. In a few words, “Tales of Love and Blood” is a gothic journey inside a progressive soul.

Once again Damian Wilson, singer for many prog-rock and prog-metal bands and artists (Threshold, Ayreon, Star One, Headspace, Maiden United, Rick Wakeman, Landmarq…) is guesting on three emotional tracks, together with many other important singers and musicians from the Italian progressive and hard-rock scene.

Released as a digipack CD.