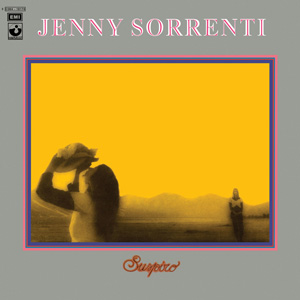 Sister of well known artist Alan Sorrenti, Jenny (or Jane, as she was called in her early releases) was born in Naples from welsh mother, and formed there the acid folk trio Saint Just. With this band she released two albums before embarking in a solo career that only produced two more albums in the 70’s.

Jenny’s style as a solo artist is far from her previous bands, being much closer to the song format. Both albums being mainly built on Jenny’s delicate voice; “Suspiro” is the best of the two, with help from experienced musicians like Peter Kaukonen (brother of Jorma, Jefferson Airplane’s guitarist), drummer Francesco Froggio Francica (from Raccomandata con Ricevuta di Ritorno and Procession), guitarist Pino Daniele (later a well known solo artist), violinist Lucio Fabbri (PFM) and long cohort Toni Verde from the Saint Just days.

“Suspiro” has recently reached high values due to the interest by many foreign collectors in the Jenny Sorrenti production. A great rarity never reissued on vinyl, now on 180gr. wax!