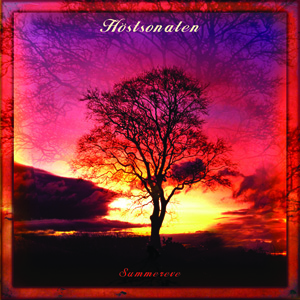 1.Seasons' ouverture
2.Glares of light
3.Evening Dance
4.On the sea
5.Under stars
6.Blackmountains
7.Prelude of an elegy
8.Edge of summer

Finally the first and final part of the “Seasonscycle Suite”, the four seasons Hostsonaten project, namely “Summereve”, dedicated to Summer.
This is the beginning of it all – the birth – and here all the main melodies of the cycle are introduced.

This record is close to “Springsong”, containing positive, sparkling moments, being influenced by ethnic and folk music. At the same time it is also somehow reminiscent of “Winterthrough”, but for sure “Summereve” is is the most progressive symphonic record of the seasons cycle, as the contribution of a real string quartet make the sound even more majestic and dreamlike.

“Summereve” is the absolute Hostsonaten masterpiece, and is THE symphonic prog record of 2011.
The complete four chapters of the concept are now available through AMS Records: “Springsong”, “Summereve”, “Autmunsymphony” and “Winterthrough”.