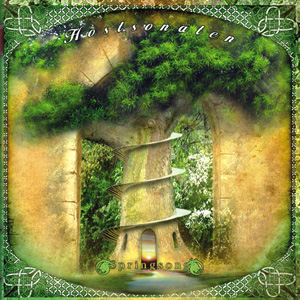 1.In the open fields
2.Kemper / Springtheme
3.Living stone and 1st reprise
4.She sat writing letters on the riverbank
5.The underwater and 2nd reprise
6.Lowtide
7.The wood is alive with the smell of the rain
8.Evocation of spring in a fastdance
9.Toward the sea

“Springsong”, the 4th and final chapter of Hostsonaten’s ‘Seasoncycle Suite’, had originally been published by Sublime Label in 2001. The original Cd is out of print by a few years and now AMS records have decided not only to reissue it but to realize a brand new album only in little part based on the old version.

Starting by the ‘exterior’ aspect we find a wonderful new graphic work completely different form the previous one, in line with the ‘Seasons project’ and with excellent paintings by Davide Guidoni. All in a gatefold LP-replica box with a deluxe booklet with new credists, informations, images and details.
Musically speaking, the 2001 work has been completely reworked. The album has been remixed in high definition quality, every single track has been cleaned and re-equalized to give a new and strong dynamics to the music, now more powerful and trenchant.

Fabio Zuffanti and Robbo Vigo, the authors of this restyling, have also given light to a great number of new musical details and, most important thing, have played a lot of new musical parts absent in the old version:
– New mellotron parts played with a real mellotron (the old parts were played with samplers)
– New bass parts in the whole album
– New moog, bass pedals and percussion parts
– 13 minutes bonus track (Suite bretonne), acoustic suite, the track from which Springsong was born.

To make a long story short, it’s a completely renewed record, born again to new life! “Springsong” is dedicated inspired by the intimate legacy between man and nature. The music of “Springsong” looks back to the time when human beings lived according to natural rhythms and it has the colours of Renaissance masterpieces. There are no studio tricks, no playing machines, but only the touch, imagination and sensibility of real artists. If you love such works as Genesis’ “Trespass” or Anthony Phillips’s “The Geese And The Ghost”, you will certainly enthusiastically welcome this album. Even if you like acclaimed bands such as Clannad, Nightnoise and Moving Hearts, bands who usually play on the edge of several musical worlds, you will find the good vibrations you need. But you will also feel at home also if you are searching for jazzy and traditional echoes from other European latitudes. For this adventurous trip, Fabio Zuffanti united some former Finisterre members (Stefano Marelli, Agostino Macor, Boris Valle, Francesca Biagini) as well as some very talented musicians who normally approach rock music in a different way (Sergio Caputo, Federico Foglia, Edmondo Romano, ex Eris Pluvia and Ancient Veil). The result is a brand of powerful modern sounds and exotic and unusual voices of ancient instruments (woodwinds, pianos, strings, guitars and so on) that give “Springsong” a very unique and original flavour. With “Springsong” Fabio Zuffanti offers us his most painstaking recording, a work which shows the maturity he has reached and which goes beyond the fences that sometimes enclose the progressive rock world.