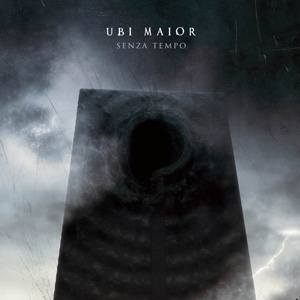 After the 2005 well received and critically acclaimed CD Nostos Ubi Maior release their second awaited opus called Senza tempo.
It is not a proper concept album but its major influence (yet not the only one) lies on Neil Gaiman’s graphic-novel masterpiece, Sandman, and on its main characters, the Endless: 7 brothers and sisters named Destiny, Death, Dream, Desire, Despair, Destruction and Delirium. These 7 concepts are also the starting point for the 10 songs (one is a four-parts song) included in the album. In comparison with their first work Nostos the new songs represent a remarkable step forward to a more structured writing, yet with more experimental moments.

The giants of the seventies italian prog rock are not the one and only reference anymore; yet the 2009 Ubi Maior sound remains powerful, with its strong, dark and symphonic atmospheres. The themes of the lyrics give their music a haunting edge, and it’s still possible to hear echoes of Il Balletto di Bronzo and PFM but with also reference to some british progressive rock as King Crimson and Pink Floyd. The sound of the band is still vintage, based heavily on Hammond organ, mellotron and pianoforte with a hard-edge guitar lines. The italian lyrics are from time to time hopeless, introspective, dark, sacred and onyric and their aim is to develop and communicate – possibly in an original way – emotions and ideas that lie under Neil Gaiman’s concept of the Endless.

Released in Digipack edition with an inner sheet for the english translation of the lyrics.