RETURN TO THE CASTLE 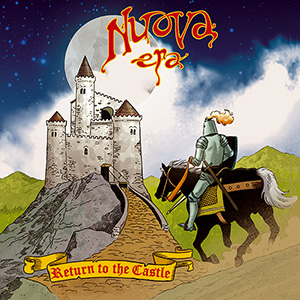 Nuova Era are a fundamental band in the Italian prog-rock scene: active between the late ’80s and the first half of the ’90s, they released in those years four albums which most of the prog enthusiasts consider unmissable for whoever nourishes even the slightest interest in the ‘progressive rock matter’.

“Return to the Castle” is no exception, and marks the true comeback for the group led by Walter Pini, the band’s main composer, here joined among others by the historical singer and guitarist Alex Camalti. Over twenty years have passed since “Il passo del soldato” (1995), a long period interrupted in 2010 by an eponymous release (AMS187CD, 2010), a compilation of already released songs, demos, new studio and live recordings.

Given these premises, the publication of “Return to the Castle” therefore represents an important event: a 75-minute symphonic progressive rock, sung in English for the first time in the history of the band, which ranges from baroque sections to other ones more dreamy and atmospheric. To the considerable length of this album, consisting of six long passages alternated with shorter interludes called ‘Carousels’, contribute many long-lasting instrumental parts. A must!