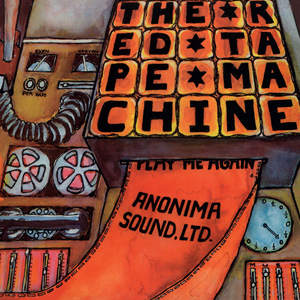 Side A:
1.Red Tape Machine
2.The Last Debutante
3.Window on the City
4.Metrò Song

Born as a beat music trio in 1964, Anonima Sound are mostly known for the presence, in the early years of their career, of a young Ivan Graziani; the latter left the group in 1970 for military service, and then undertook a long successful solo career. Until then, the band had released only four singles, without ever managing to record a full-length LP.

In 1971, only drummer Valerio Gualazzi was left from the original line-up; after the publication of another 45rpm, he re-established the band as Anonima Sound Ltd., with six new musicians. The following year, finally, the group released their first – and, eventually, their last – record, “Red Tape Machine”, with Ivan Graziani playing bass guitar as a guest in two tracks.

The music of “Red Tape Machine” completely differs from the sound of the ’60s, and is completely sung in English, thanks to the presence of the American Richard Ingersoll on vocals and flute. Although it shows a remarkable compositional maturity, the album is often neglected and underestimated, as it has always been associated with the Italian prog scene, to which it belongs to a minimal extent. Blues, west-coast and folk sounds intertwine in the eight tracks of the album, almost exclusively outlined by the acoustic guitar, whose riffs and arpeggios are accompanied by flute and electric guitar solos.

Yet another little gem to be rediscovered, “Red Tape Machine” is almost impossible to find in its original 1972 edition, and its ’90s reissues are now long-time deleted. This beautiful album is now available again thanks to this AMS Records edition on 180gr. black vinyl, faithful to the original one with gatefold sleeve.