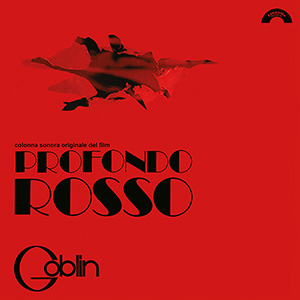 Side B:
4.Wild session
5.Deep shadows
6.School at night
7.Gianna

There is little closer to perfection than the magic blending between Dario Argento’s frames and Goblins’ music in “Profondo Rosso” (Deep Red), both made in 1974 – and then released the following year – when both artists were living a period of maximum creativity: their fortuitous meeting produced two masterpieces, one cinematographic and one musical, a source of inspiration in the decades to follow up to the present day.

The music of “Profondo Rosso” was originally commissioned to jazzman Giorgio Gaslini, a former Dario Argento’s collaborator who wrote the songs on side B of this LP, but was soon entrusted to four young musicians from Rome: Claudio Simonetti (keyboards), Massimo Morante (guitars) , Fabio Pignatelli (bass guitar), Walter Martino (drums). The legendary theme and sinister melodies of the title track set a new standard at the time for film music, not just in the thriller / horror genre, and thanks to their dazzling debut Goblin still enjoy international fame and respect.

An essential masterpiece for any lover of soundtracks and cinema, Italian music, progressive rock, jazz-rock and much more.
A piece of History, reissued in a faithful reproduction of the original 1975 version.