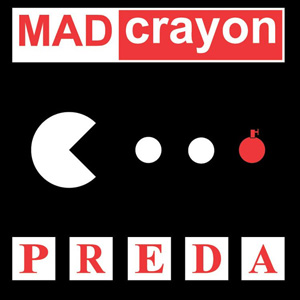 According to Prog Archives “Mad Crayon is a band that draws comparisons to the Golden Age of Italian progressive rock a generation earlier featuring complex writing with bright vocals around frequent breaks and clever solos. Progressive rock with an ear for melody, the music of Mad Crayon illustrates why the genre is enjoying a second Renaissance in Italy”.

Born 1986 in Rome, Mad Crayon made their first release in 1993 with the excellent and promising “Ultimo Miraggio”. In 1999 Mellow Records produced their second cd “Diamanti” and in the same year the band appeared on the Zarathustra’s Revenge” tribute. From 2002 until today Mad Crayon also appeared on three music projects with Colossus Progressive Music Association : “Kalevala”, “Il colosso di Rodi” and “Dante’s Purgatorio – The Divine Comedy – part 2”. “Preda” is their third record and by far their best one, still focusing on melodies very beautiful!

Still according to Prog Archives: “You’re missing some great music if you haven’t heard “Preda”! These guys can play. Discovered through the highly recommended Colossus Project “Kalevala: A Finnish Progressive Rock Epic” I have been blown away by the freshness and clarity of this music. Recorded so cleanly, using so many sounds in such unusual combinations, and constructed with such nuance and unpredictability it is a true listening adventure. (Put on the headphones!) Lots of piano and acoustic guitars, crisp drumming, and bass playing that is so alluring as to constantly draw my attention from the rest of the ensemble. One very noticeable element of Preda’s recording is the wonderful and brilliant use of space within the music; they don’t fill every second for the sake of filling space; they let the sounds, chords, and melodies seep, percolate and fill your soul. And the singing is in Italian!”.