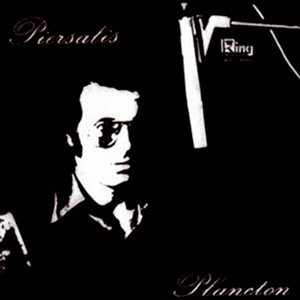 Piero Marras, aka Salis, is a musician from Sardinia who released in 1972 an album called “L’alba di domani” (Dawn of tomorrow) with his band Gruppo 2001, a great mix of melodic pop and prog-rock in the best Italian and Mediterranean tradition.
The support of the small label King, however, was poor, and the album went largely unnoticed; after a few 45rpm, an unsatisfied Salis decided to leave.

His first and only LP as Piersalis was published in 1973, once again on King label, a prelude to a solo career that continues to this day. In the eight compositions that constitute “Plancton”, four on each side, the length of the tracks is reduced, as well as the progressive hints tend to give way to more immediate melodies and orchestral arrangements, but by no means trivial.
Among the musicians who accompanied Salis in the making of this LP we find guitarist Ciccio Solinas from Gruppo 2001 himself, and saxophonist/flutist Enzo Avitabile, at the beginning of a career that would make him collaborate with great names of the Italian and international scene.

This is the first ever reissue of an extremely rare item.