The Blues Right Off 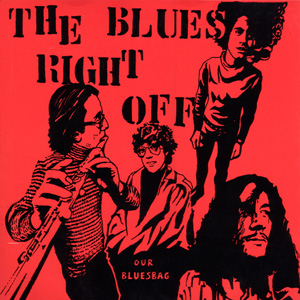 An obscure band from Venice, but their only album, released in a very limited pressing, is among the rarest of Italian 70’s progrock. It was also one of the first (or possibly THE first) LP’s by an Italian band with a strong blues attitude, because blues was considered in Italy as a music only reserved to foreign musicians during the 60’s. The band’s leader, guitarist Claes Cornelius, was in fact a foreigner, from Denmark, that had moved to Italy in the mid-60’s and soon played an important role in the beat era and afterwards. He had founded with sound engineer Ermanno Velludo the Suono Recording Studio. The album, “Our bluesbag”, contains seven overall very good tracks, all sung in English much more in the best British style prog rock blues of the very first seventies than anything comparable coming from Italy.
The 7 tracks are based on quite fuzzy electric lead guitar solos and a high-pitched voice with an overall rough production. All songs are original, while references may be Jethro Tull, Canned Heat or the first Fleetwood Mac sound, generally speaking the group has a very personal sound.
(source: www.italianprog.com)

The exclusive AMS reissue faithfully reproduces the original cardboard sleeve of the original record, has a booklet with extended liner notes telling the complete history of The Blues Right Off and is strictly limited to only 500 hand-numbered copies.