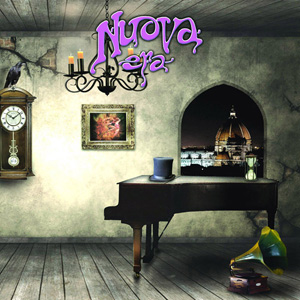 Nuova Era are one of the most important bands of the Italian ‘progressive rock renaissance’ towards the end of the ’80s.
Standard-bearer of a baroque and melodic sound woven into turgid organ sonority reminiscent of the great lesson of the Italian progressive rock of the seventies; with an ambitious songwriting the three new tracks, full of a remarkable consistency of purpose and lucidity, result immediately accessible next to their previous works.

Magic is released again from the swirling and disturbing notes of “Lasciate ogni speranza… voi ch’entrate (Lucifero)” as well as from the wrapping and epic melodies of “Canto II (Paradiso)”, grafted onto rhythmically tight portions, from which emerges the antique yet timeless taste of the Tuscan combo led as always by Walter Pini, here assisted by Davide Guidoni (Taproban) on drums and Guglielmo Mariotti (Taproban, The Watch) on bass, who perfectly fit into the overall feeling.

Exciting is the performance, in this reworked and restyled version, of sounding monuments buried in the past such as “Io e il tempo” and “Dopo l’infinito”, the band’s first suites that enable us to understand, after decades, the fusion between the taste of the pictorial music and the profound dimension of the lyrics, while a live version of the classic dark-prog of “La tua morte parla” enriches this work.
I Nuova Era with this new work express their loyalty to their own history and to the stylistic features of the best progressive Italian baroque prog and confirmed with a creative streak that they shimmer with infinite intensity, still after all this infinite time…