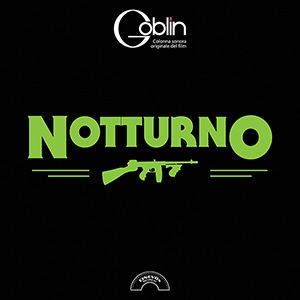 Goblin’s name is very popular since the year of “Profondo Rosso” (1975), but even those who know them in depth “Notturno” remains an almost completely unknown chapter within their vast discography. The production the music was composed for was edited in two versions, a theatrical one released in 1983 and a television one in seven episodes that was broadcasted only three years later.

Led at the time by Fabio Pignatelli (bass), Maurizio Guarini (keyboards) and Antonio Marangolo (saxophone), with the precious contribution of Derek Wilson (drums) and Marco Rinalduzzi (guitar) – from the line-up that had just recorded “Volo” – Goblin composed the music for “Notturno” already at the end of 1981, upon request by the RAI TV producers. The recorded material was then selected by Cinevox, that only in ’83 published the film’s soundtrack on LP: given the poor success of the film, also the soundtrack album went virtually unnoticed.

It was a pity, because Goblin here returned to work in a field where they almost have no competitors, that of music for films, creating a work that is tense and melancholic at the same time, combining jazz-rock and fusion with the sounds of the early ’80s; tension, however – which can’t be missed in a spy movie – is always delivered by the soundtrack rock component. The essence of Goblin’s music is completely enclosed in the beautiful “Nocturne”, an opening track that swings among echoes of ‘007’, references to the “Zombi / Dawn of the Dead” OST, energetic guitar riffs and synthesizers that dialogue with the keyboards.

Re-released on CD a couple times, “Notturno” has never been reissued on vinyl before. This AMS Records edition, exclusively made for the Record Store Day 2017, expands the original tracklist with the addition of unreleased takes and with a completely different artwork and a poster that includes a presentation text and reproductions of rare material related to the movie. Although not excellent from the sole cinematographic point of view, musically “Notturno” is yet another jewel made by artists that had film music rushing in their blood!