MORE ANIMALS AT THE GATES OF REASON (PINK FLOYD TRIBUTE) 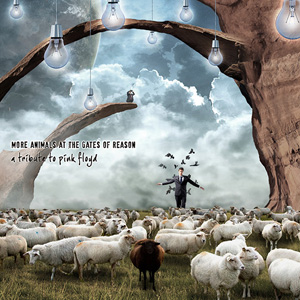 This one, a double CD released on AMS Records and exclusively distributed by BTF, is not the usual Pink Floyd Tribute; it’s a project that took more than one year to be completed, but whose results are well worth of the long wait.

Offering the Floyd’s songs under a new guise – from the ‘60s until the last “The Division Bell” in 1994 – we find mostly Italian artists (Pandora, Fabio Zuffanti, Conqueror, EgoBand, Archangel, Prowlers, Greenwall & more), from the little-known but solid and florid progressive rock panorama of the peninsula, but there are also a couple of international acts, such as the American Jay Tausig, the Finnish Permanent Clear Light and the supergroup The Samurai of Prog, including Roine Stolt from The Flower Kings and Jon Davison, the current lead singer for YES!

Another peculiarity of this 2-CD release is the choice of atypical PF songs: the great classics – “Wish You Were Here”, “Another Brick in the Wall”, “Money” , “Comfortably Numb” and many others – were deliberately left out, in favor of lesser-known but equally important tracks, from albums such as “The Piper at the Gates of Dawn”, “A Saucerful of Secrets”, “Animals”, “A Momentary Lapse of Reason” and “The Final Cut”, almost always forgotten in any common-tribute album.

This collection, which does have the flavor of a real album, given the artists’ ability to make Floyd’s songs their own, comes in papersleeve format, with a beautiful artwork-collage that recalls the various productions of Waters & Co. Artistic production by Marco Masoni from Germinale.
Not to be missed!