MOONGARDEN – Align Myself to the Universe 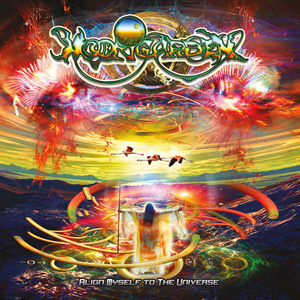 There are artists and musical – or, more generally, artistic – projects that transcend each person’s personal tastes, because of their objective importance inside a given scene. Within the ‘progressive rock made in Italy’ panorama, from the ’90s to our days, in light of the quality and impact of their productions, Moongarden, led by multi-instrumentalist and music producer Cristiano Roversi, rightfully fall among the fundamental bands.

With an impressive back catalogue and after a four year break, Moongarden have created an album that makes its apparent simplicity one of it main strengths, and that succeeds in accompanying the listener on a musical journey that one would like to never end. “Align Myself to the Universe” is a work whose absolute protagonist is melody: it is, in fact, all over the place, from vocal lines to guitar solos and exceptional piano scores that never end up in self indulgence. Vintage keyboards and a warm rhythmic section, robust and groovy but never intrusive, complete a wonderfully balanced and excellently produced picture.

AMS Records is therefore proud to include this new Moongarden gem in their catalogue. The album is made available in two formats, papersleeve CD and 180gr. black vinyl with gatefold cover. The artwork has been made by the Belarusian Ed Unitsky, a visionary artist who, in addition to having made numerous covers in recent years for several Roversi’s projects, has forged his own original and immediately recognizable style to the court of bands such as Flower Kings and The Tangent. In short: not to be missed!

1.Here Now
2.Step after Step
3.Run
4.The Golden Circle
5.Planet of the Absurd

1.Here Now
2.Step after Step
3.Run
4.Planet of the Absurd

Side B:
1.The Golden Circle
2.The Immutability
I – The Immutable
II – Acqua Terra Fuoco Aria
III – Om
3.Shiva
4.The Union