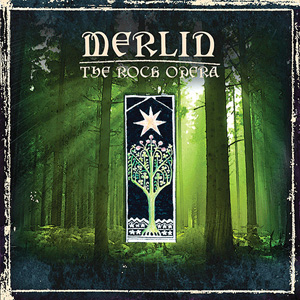 CD 1:
1.Overture
2.As it was in the beginning
3.Winter's lament
4.The musician arrives
5.Tricked / Must you leave so soon
6.Free for another
7.The wedding march
8.Our time is now

CD 2:
1.Fairies dance
2.Madman sings
3.Song for the new day
4.Merlin and Vivian
5.Beyond the nightmares
6.How to do the sleeping spell
7.Gloria
8.Blessed with peace
9.How long can she wait
10.Uninvited guest / The last battle
11.Wait for the Golden Age

The songwriting process of “Merlin – The Rock Opera” was seen by Fabio Zuffanti, back in 1998, as a real challenge, after the release of Finisterre and Höstsonaten’s debut albums. Between ’98 and the following year the opera had been written with the important Victoria Heward’s lyrical contribute, and month were spent searching for musicians, singers, dancers and actors to set up a real Rock Opera, which toured Italy and France. In this occasion Fabio Zuffanti laid the foundations to everything that came next, including La Maschera di Cera and Höstsonaten’s “Seasoncycle” project.

The album was then recorded in 2000, released and repressed more than once by Iridea label from Genoa, and is now still wanted by many prog listeners and collectors. This reissue in papersleeve format is now filling this void, adding new musical and graphical elements.

This new version is in fact housed in a beautiful artwork, which comprises credits, photos, lyrics and the opera screenplay. The album – a double CD – has also been remixed to exhalt every musician’s contribute, and the mellotron parts have been completely replaced, played with a real instrument instead of a synthesizer.

A great due reissue for a little big gem of Italian Progressive Rock!