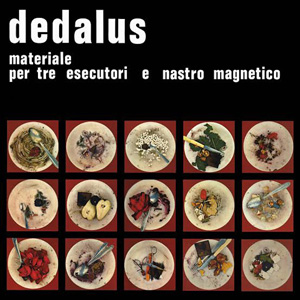 Dedalus where a Jazz-rock band of Pinerolo, and had a good live activity despite being far away from the genre compared with the most important Italian bands of that time. After a great performance at the “Festival di Avanguardia e Nuove Tendenze” of Naples in 1973, a renowned journalist described them as the revelation of the festival.

Their first album contained a unique blend of jazz-rock with some influence from Soft Machine, while this second LP, “Materiale per tre esecutori e nastro magnetico” released in 1974 sees the band reduced to a trio, as bassist Furio Di Castri left the band in order to pursuit a long career as a jazz bass player. This record is much more avant-garde with an increased use of electronics. According to the book “Libro bianco sul pop in Italia” this record is “…the only example in Italy of how to deal with experimentation having fresh and brilliant ideas, purposely avoiding the pretentious intellectualism of bands that believe they have instantly discovered the matter of sound and therefore felling free to use it with ridiculous arbitrariness”.