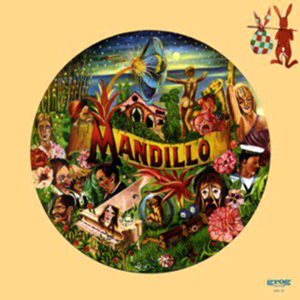 Once the Garybaldi experience ended after the release of “Astrolabio” in 1973, drummer Maurizio Cassinelli and guitarist Bambi Fossati went on playing together: the following year Bambibanda e Melodie published a self-titled LP where Bambi’s guitar plays all over the place, but also containing some Latin atmospheres, reminiscent of the early Santana.

In 1976 is then Cassinelli who gathers a series of musicians from the Genoa area to make them collaborate to his own project called Mandillo: here we find Bambi Fossati himself, guest on electric guitar, Aldo De Scalzi (playing keyboards, from Picchio dal Pozzo) and his brother Vittorio (from famous New Trolls, playing the acoustic guitar and standing at the mixing desk). This ensemble created an album that sounds really different from Garybaldi’s previous ones: it’s a song-based LP, strongly influenced by The Beatles’ style and the American West-Coast sound.
You can easily recognize melodies, harmonies, guitar arpeggios and typical multi-vocals choirs, the ingredients of a peculiar release, if we consider when it was conceived and recorded; each new listen reveals new details, due to the accurate arrangements and the mix of the various instruments played.

This album is reissued today for the first time on CD in the usual mini-LP papersleeve format, with the addition of never seen before photos of the band, both in studio and on stage.