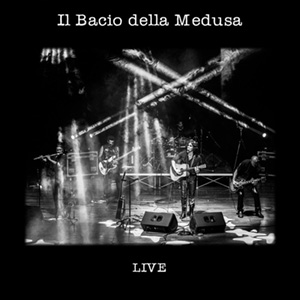 One of the most important bands of the Italian progressive rock scene, Il Bacio della Medusa from Perugia, interrupt a few years silence – “Deus lo vult” was released in 2012, and recently reissued by AMS Records along with the other two chapters in the group’s discography – with a live album that returns the energy and the elegance of the band on stage, especially for those who have never had occasion to see them in such circumstances.

This album, simply entitled “Live”, was recorded at the Perugia Art Rock Festival on October 25th, 2015, on a happily shared stage with the former historic Le Orme’s frontman Aldo Tagliapietra, in front of a large and sympathetic audience: there it comes a powerful mature and inspired show.

Il Bacio della Medusa here offers their own record trilogy best songs, in a fierce rock context, also renewed and embellished by a thousand details that will surprise even the most demanding listener.