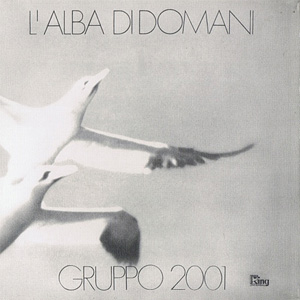 Originally released in 1972 and reissued through the years only in Japan and Corea, the only LP ever recorded by Gruppo 2001 is now available again in a new deluxe edition. A band coming from Sardinia, Gruppo 2001 featured keyboardist/singer Piero Marras, a.k.a. Salis – not to be confused with the author of “Seduto sull’alba a guardare” and “Dopo il buio la luce”.

The album tracks are mostly based on acoustic guitar arpeggios and keyboard layers, but they sudden turn progressive when the drums enter and mark the pace to moog solos and acute vocal harmonies. A balanced mix of soft and heavier moments forge a great debut album, sadly the only one ever released by the band; Gruppo 2001 just managed to issue some 45rpm’s in a more commercial vein before splitting up. Piero Salis left in 1974 and released the solo album “Plancton”.