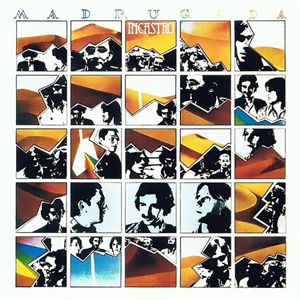 Second album by Madrugada, this time the trio was joined by some guest musicians like Lucio Fabbri on violin (from Piazza delle Erbe and later PFM) and Luciano Ninzatti on guitar (from Eugenio Finardi’s bandCrisalide).

With a much better production and sound, this can be considered the best of their two albums, with long tracks like the opening ”Romanzen” or ”Aragon” showing a very good composition quality. Another nice song is ”È triste il vento”, that had previously been played by another group from Bergamo that had a close connection with Madrugada, Perdio. Like in the first album there are some odd different-styled tracks, like the folky ”Noter de Berghem” and the silly ”Katmandu” (that was alsoreleased on a single with ”È triste il vento”, to no success), but ”Incastro” can surely be appreciated by progressive music fans.