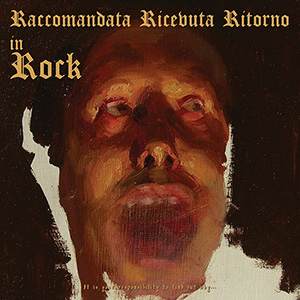 Among the most convincing comebacks on the reborn Italian progressive rock scene we find, without a shadow of doubt, “Il Pittore Volante” by Raccomandata Ricevuta Ritorno: released in 2010 by AMS Records in the usual CD papersleeve, LP gatefold formats and in a very limited boxset, that record broke an almost 40-year silence in an excellent way, with an energetic and genre-crossing album in which stood out, as if the hands of time had stopped in 1972, the unmistakable voice of the band’s original singer Luciano Regoli. In 2015 RRR has also released “Live in Elba”.

“In Rock” marks another rebirth for Raccomandata, that finally returns with brand new unreleased material after almost a decade. The B-side of this release contains a cover of the famous “Mr. Crowley” by Ozzy Osbourne and the songs “Raoul” and “La spiaggia”, taken from the full-length version of “Il Pittore Volante” but that never appeared on vinyl before. However, the main dish is on side one: a dark-tinged heavy-prog suite divided into three acts, with an epic and engaging central part and an enthralling finale; there’s an extensive use of wind instruments – saxophone above all – and classical ones – piano, string instruments – but, once again, Luciano Regoli’s voice stands out intact, with its unique timbre still unharmed by the pass of time!

An exclusive release for Record Store Day 2019 on coloured vinyl, with gatefold cover and a 30x30cm poster!