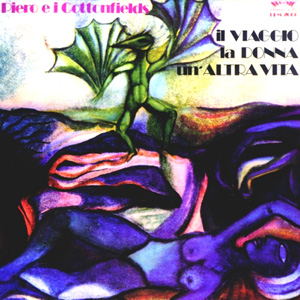 This group was formed and led by singer Piero Cotto (from Asti, Piemonte), who had begun his musical career in the early Sixties as singer and guitarist. Cotto had also lived in the U.S.A. at the end of the Sixties and he played under the name of Peter Cook in the group Majority One. Coming back to Italy, he formed this six-piece band that made a successful appearance at a TV contest called “Disco per l’Estate” with their first single “Due delfini bianchi”.

In 1972 their first and only album came out, under the long title “Il viaggio, la donna, un’altra vita”, housed in a beautiful gatefold cover. Despite some more pop-inspired tracks, the album has a good musical level, halfway between early Delirium and Odissea, with very nice flute passages like in “Cantico” or the title track, and the powerful harsh voice of Piero Cotto (similar to Delirium’s Ivano Fossati) in evidence.