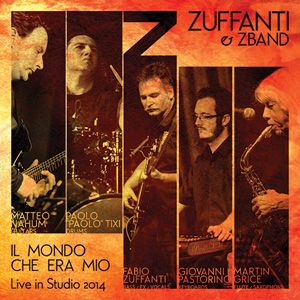 FABIO ZUFFANTI: 20 YEARS OF PROGRESSIVE ROCK AROUND THE WORLD

After the great international success of his last album “La quarta vittima” Fabio Zuffanti returns with a live in studio album. The album is the report of a tour that led to Fabio and his band around Italy, Belgium, the Netherlands and Canada. It summarizes twenty years of career of growing success and offers a kind of best-of of his solo repertoire and than that of his bands Finisterre, la Maschera Di Cera and Höstsonaten.

Zuffanti says:
During the concerts for “La quarta vittima Toru 2014” I wanted to realize a live album. Unfortunately, for a number of technical problems, we did not succeed but I told myself I had to do something to stop at least one of the gigs of this extraordinary band. In the absence of new concerts the best thing was to record an album “live in studio” with some of the songs that we played during the tour taken from “La quarta vittima” and other writing for Finisterre, Maschera Di Cera and Hostsonaten that I still feel very close to me.
So, one day the whole group went to Hilary Audio Recording Studio and began playing live as we were in concert, unfortunately without an audience but with the same passion and intensity as ever. This is to close this period, say goodbye to our guitarist Matteo that leaves us to devote himself to the study of film music in Spain, thank our audience and prepare for our next musical steps.