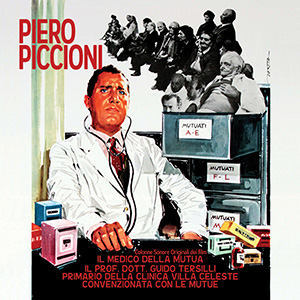 “Il medico della mutua” and “Il Prof. Dott. Guido Tersilli…” are two Italian cult films, released in theaters in 1968 and 1969 respectively; both see Alberto Sordi as main character, an initially unknown doctor that makes its way in a rigid and almost impenetrable system as that of the Italian health, and eventualy manages to open his own private clinic in which to speculate at the expense of his patients.

The two films, while dealing with the problems and contradictions of a system still ‘sick’ today, are marked by a bittersweet satire that prevents them from being protest movies. They are be accompanied by the music composed and conducted by Piero Piccioni, an ‘easy listening’ jazz consisting of a memorable theme and several short tunes and reprises.

In 1968 only a 7″ was released, with two excerpts from the soundtrack of “Il medico della mutua”, and only in 1970 the scores for both films were included on a single 33rpm, one for each side, a record that’s today evaluated hundreds of Euros. This reissue by AMS Records, on coloured vinyl, features a new artwork, a gatefold cover with an inner collection of posters and lobby cards, and several bonus tracks not present in the original version.