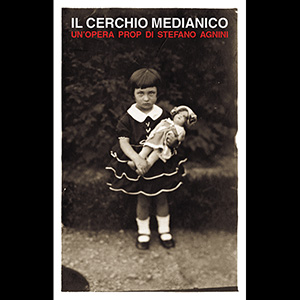 Anyone who has ever had to do with the new generation of Italian prog must have at least heard of Stefano Agnini, in particular for his militancy in La Coscienza di Zeno and his participation to La Curva di Lesmo project, along with his well-known mate Fabio Zuffanti. Today, for the first time, the Genoese composer faces the challenge of a solo record, under a total and unconditional artistic freedom.

The result is ‘a prop opera’, where the word ‘prop’ is simply a curious expression contraction ‘prog-pop’, a quite fitting definition for “Il Cerchio Medianico”, since the apparent immediacy of its compositions (pop) conceals a careful research on arrangements and exceptional compositional skills (prog). If being progressive means knowing how to skillfully wander among different musical genres, this is probably one of the most prog albums you may encounter in recent times: “Il Cerchio Medianico” contains in fact traces of Canterbury sound, jazz-rock, funk, Italian songwriting, spoken word, popular music, classic Italian progressive rock, even moments clearly inspired by Frank Zappa (“Arrivo dello spirito guida”, “Canzone delle cose vietate”).

A particular, eclectic and somewhat anarchic record, released on papersleeve CD and exceptionally in a limited cassette edition!