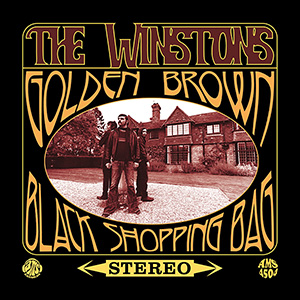 Side A:
1.Golden Brown (The Stranglers)

Side B:
2.Black Shopping Bag

There are no words to describe the hyper-productivity of what we might call, with no half measures, THE band of 2016: The Winstons, with this 7-inch, reach a total of three releases in just nine months, following the self-titled debut and last Spring “Live in Rome”. Considering each bandmember’s commitments – you know who they are: Enrico Gabrielli, Roberto Dell’Era and Lino Gitto – divided among their main bands and some extra collaborations, the result is even more surprising.

This 45rpm includes two songs. Side A contains a ‘winston-ish’ version of the popular “Golden Brown” by The Stranglers, while as a B-side we find a brand-new song which brings us back to a magical 5-year period between 1967 and 1972, across psychedelia and progressive rock, two subjects that the trio dominates with a stunning spontaneity.

Recorded in a single day at Tilehouse Studios in London and printed in only 450 copies in gold vinyl, this release is going to quickly become a rare collector’s item for sure. Unstoppable and unpredictable, The Winstons add an important piece to a rapidly growing discography, as well as a further confirmation of their excellent health status!