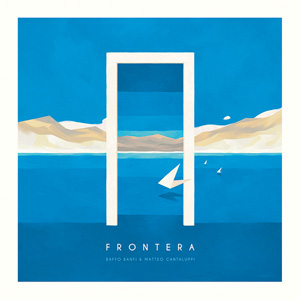 FrontEra is the new project of Banfi/Cantaluppi, and the first album of Baffo Banfi after almost 35 years of absence from the scene. Baffo Banfi was a founding member of the progressive rock group “Un Biglietto per l’Inferno”, which split up after only two albums. Meanwhile Banfi published a first 33 rpm entitled “Galaxy My Dear”, of a more electronic and ‘kraut’ kind, and came into contact with the legendary Klaus Schulze, founder of Tangerine Dream, as well as pioneer modern electronic music. Through his label “Innovative Communication”, Schulze produced two of their albums, “Ma, Dolce Vita” (1979) and “Hearth” (1981). After a spell as a sound engineer in the recording studio “La Basilica” (Milano), owned by Mina, Baffo disappeared from the music scenes to devote himself to the world of video production and post-production.

In 2010 he met with producer Matteo Cantaluppi, multi-instrumentalist and a great connoisseur of the European electronic scene of the 70s. In Milan, Cantaluppi opened the recording studio Mono Studio from the ashes of the video production studio of Banfi. From there, a relationship of mutual respect was born, which will result in the album “FrontEra”. “FrontEra”, totally realized in Italy after several years of production, is composed of six long and mainly electronic instrumental tracks. The taste for the melody of Baffo, combined with the productions of Cantaluppi and the presence of strings and wind instruments, provide an imaginary that is Mediterranean at times and sometimes ‘lunar’. “FrontEra” is released on AMS Records and distributed by BTF , the world’s largest distributor of Italian progressive, giving a sense of continuity to a discourse started 40 years ago by the same Banfi.
The artwork is taken care of by the young Milanese illustrator Gabriele Brombin.