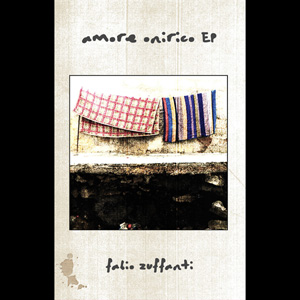 Recently defined as the “father of songwriting 2.0” by the music press, Fabio Zuffanti (one of the most important representatives of the new Italian prog scene with bands such as Finisterre, Höstsonaten, La Maschera di Cera, and so on…) has released four solo albums characterized by a personal vision on a certain prog-rock songwriting. In the cauldron of his influences there are artists such as Juri Camisasca, Franco Battiato, Mauro Pelosi, Robert Wyatt, Thom Yorke, Mark Hollis and many others.

The songs on this EP have suddenly sprung, with lyrics and music at the same time, in a stream of consciousness unexpectedly flowed on a rainy evening during last Autumn. Fabio has then finished and recorded them in the studio. It’s a set of eight short and bare pieces, almost sounding like a confession; guitar, vocal, piano and a little something else to offer an intimate and cozy dimension, leading to expose thoughts, images, memories and pain that have long permeated Fabio’s soul.

“Amore Onirico” is the title Fabio Zuffanti wanted to give to this songs collection, told in an often surreal and immediate language, that have a lot to do with dreams, feelings and loss (“Tua madre ti ha preso”, for example, is dedicated to the last days of the musician’s father). Yet another aspect of a multifaceted and unstoppable artist is here revealed, through an even more personal point of view than the one we were used to by Fabio’s vast music production.