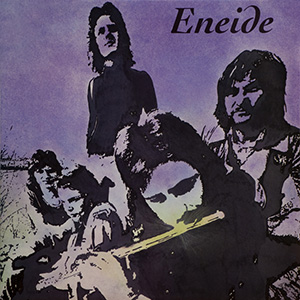 The story of Eneide is that of many other bands who have populated and shaped the so-called ‘Italian progressive rock’ movement. Coming from Padua and initially carrying the name Eneide Pop, they played in support of prog-giants such as Genesis, Van Der Graaf Generator and Atomic Rooster, and managed to sign a record contract with Trident – the same label of Semiramis, Dedalus and Biglietto per l’Inferno.

Their only LP, “Uomini umili popoli liberi” (Humble men free peoples) was recorded in 1972, but remained ‘in the closet’ for nearly twenty years, until it was privately reissued in an LP edition now almost impossible to find outside of the strict collectors’ circle.

Any fans of vintage sounds will absolutely like the ten tracks on this album, interspersed with gritty guitar riffs and keyboard melodies (moog, hammond, eminent), all seasoned with precious flute interventions. The result, taking into account the fact that at that time all the members of the group weren’t even 18, is unbelievable, and it is really unfortunate that the huge potential of the band hadn’t been expressed since the beginning.

Already reissued by AMS Records in 2010 as a papersleeve CD, “Uomini umili popoli liberi” is now proposed as a gatefold LP, faithfully reproducing the previous vinyl edition. Another important step in the discovery of the wonderful world of Italian progressive rock!