ELLESMERE II / FROM SEA AND BEYOND 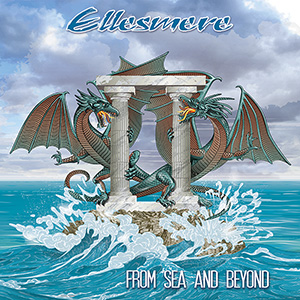 Three years after the debut “Les Châteaux de la Loire” Ellesmere are back, still led by the Italian multi instrumentalist Roberto Vitelli, who wrote the music and the lyrics of every song and took care of most of the bass and keyboards parts on the seven tracks that are part of the concept. Every song deals with a different aspect of the complex relationship between man and sea, from man’s curiosity and fear towards what is hidden deep inside the sea to the call for adventure and for traveling to the end of the known world… and beyond. The sea, the unknown, the infinity grandeur and the human soul are the key themes that tie together the concept that feeds the album.

“Ellesmere II” sounds way more energetic and varied compared to the previous work. It’s not difficult to find similarities with the great prog acts of the past: Yes immediately does spring to mind, but also King Crimson during the rawest parts (a quote from RED is hidden in the second track), UK challenging jazz prog, the symphonic attitude of ELP, Kansas tension towards melody, the breathtaking chord changing sequences typical of Magellan and Cairo, the intimate and gloomy mood from early Peter Gabriel productions. The brief opening instrumental section links to the last track of the previous work, still hazy and filled with the sounds of nature, and this new journey into the waters. The unpredictability of the savage sea is depicted by the alternation of complex and impact tracks (“Marine Extravaganza”, “The Schooner” and “Time, Life Again”) to other shorter and quieter ones (“Runaway”, “Ridge Fanfare”).

The album artwork is also a piece of art, as it was specifically created by the English painter and designer Colin Elgie (also part of the famous Hipgnosis Studio), the same who drew Genesis’ “A trick of the tail” and “Wind and wuthering” sleeves back in the 70s.