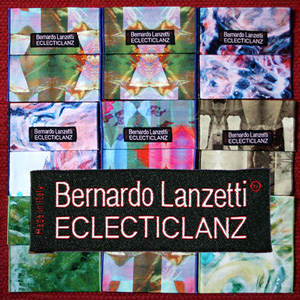 Mr. “Impossible Voice” is back!
In the Seventies, Bernardo Lanzetti has been one of the most important voices and performers of Italian prog, vocalist of Acqua Fragile and later front man of Premiata Forneria Marconi, for a legendary bunch of records and world tours. In 1979 he embarked in a long successful solo career producing several albums; he is currently recording and performing with the prog outfit Mangala Vallis. Well-known for the incredible span of his voice and an everlasting will to experiment with vocal solutions, his music moved between blues, folk, prog, rock, contemporary classical music.

His new record “Eclecticlanz” is a true gem featuring brand new sounds as well as vintage instruments, without of course leaving back Lanzetti’s typical stunning vocals experimentations. Intertwined with some of Lanzetti’s original artwork, the album could probably be defined as the first example of a ‘Concept & Code’ production. In other words “Eclecticlanz” is an amazing and exciting melting pot of foreign languages vocals and genres like avant-garde rock & prog, but also classical, pop, metal, contemporary music and even a tango!

We decided to pack such a masterpiece in the incredible and unique gimmick called by the artist CD ‘Fashion Jacket’: with this special packaging all CD covers are different from each other!