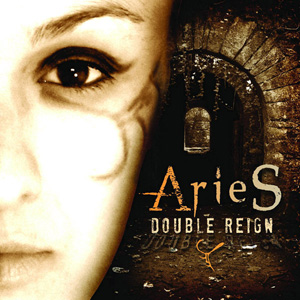 Aries is a duo formed by singer Simona Angioloni and musician Fabio Zuffanti, known in the music world to be the component of several bands and projects such as Finisterre, Maschera di cera and Höstsonaten, as well as his solo career. Simona Angioloni has experienced several years of live and studio activities experimenting with her voice.

The duo, aided in the studio and on stage by several guest musicans, has produced in 2005 his first album (‘Aries’, Mellow Records). A successful CD linking progressive instances and folk elements.

In 2010, Aries comes back with their second album, a concept album entitled ‘Double Reign ‘which draws part of its inspiration from the book of the writer Paola Roe ‘Double kingdom’ published in 1997. The story tells the adventures of a woman following an ill-specified natural event runs from his city to take refuge in a hotel scattered among the hills. Once inside she can no longer find the exit and thus she wonders among the rooms of the building from time to time dealing with strange characters and surreal situations that will help her to free themselves from the prison where she has voluntarily confines.

Musically speaking, the CD features only part of the folk influences of the first work focusing on dark and ethereal, electronic pop and hard rock athmospheres and, obviously, on all the great modern unconventional progressive rock.

In addition to Zuffanti (committed, as well as in the composition of the songs on bass, guitars and keyboards) and Angioloni (which also co-writes the songs) there is the usual array of guest musicians including a string quartet featuring the flute of Vittorio De Scalzi (New Trolls).