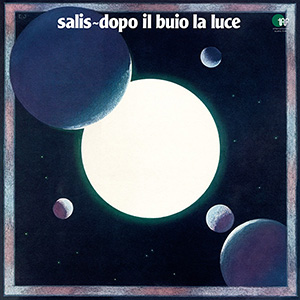 The brothers Salis, Antonio and Francesco from Santa Giusta, Oristano in Sardinia, began their career in the first half of 60’s under the name of Barrittas, releasing a bunch of singles until the end of the decade. Produced by their elder cousin Lucio, they changed name to Salis’n’Salis in 1969, but by the time their first album was released the name has changed again to Salis.
Their debut album, “Sa vida ita est”, came in 1971. In 1974 a second album was recorded, this was in fact a solo album by Antonio Salis; one of the first quadraphonic records from Italy.

[In 1979] a new quartet was formed, and a third album appeared, called “Dopo il buio la luce”.
A totally different album from the previous two, this has a much more keyboard-led and prog-inspired sound, being almost entirely instrumental and with extended jazz-rock influenced parts like in the long “Rapsodia per emigrazione” and “Dopo il buio… la luce”. This last album is the best one for the progressive fans, but it wasn’t successful and the group sadly disappeared again after 1980.
(source: www.italianprog.com)