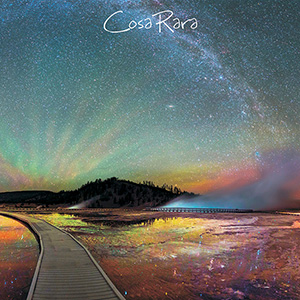 AMS Records is proud to present an atypical production within its catalog, which comprises in most cases classic Italian prog-rock and soundtrack releases. CosaRara is a project born in 2005, that saw many bandmembers’ changes during the years and today eventually manages to record and publish their first eponymous album.

The roots of the group are intimately bound (though not by birth, given the young age of the members) to the ’70s prog music; the psychedelic and progressive vein of the band inevitably leads them to experiment with new musical languages, flowing at times into electronica, math and post-rock.

The current lineup, made solid not only by time mostly by an intense passion for playing together, present their self-titled album as an arriving and simultaneously starting new point. Six long instrumental tracks – with the exception of the brief interlude “Serenloonies” – that can flow in a single homogeneous mix or be individually listened to, each as a planet in its own, threaded by the band’s ability to overlap and merge various sound layers in an often surprising way. In a nutshell, “CosaRara” will undoubtedly awaken the attention of the most hardened ‘proggers’ too!