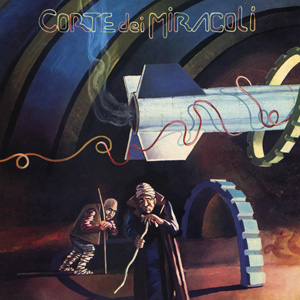 Side B:
4.Il Rituale Notturno
5.I Due Amanti

With a distinctive line-up of two keyboard players and no guitars, Corte dei Miracoli from Savona released just an album in 1976.
They had been formed around 1973 by past members of Tramps, like keyboardist Alessio Feltri, that had previously played with Il Giro Strano, a band that’s strictly connected with Corte dei Miracoli. Original second keyboardist Michele Carlone left the group just before the recordings for their debut album, and was replaced by the experienced jazz pianist Riccardo Zegna.

Only 5 songs, which contain both beautiful melodies and fiery interludes. Skillwise all musicians are top level and all instruments are exploited perfectly. “Corte dei Miracoli” has also a little of jazzy edge due to the repetition of a theme throughout a song using different instruments.
(Source: www.italianprog.com)