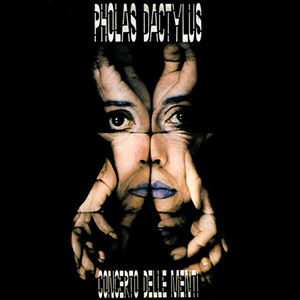 Pholas Dactylus have left, with “Concerto delle Menti”, a unique example of avantgarde prog containing only spoken lyrics that can be appealing to the most adventurous listeners even because the musical background is on a high level. The album contains a long suite divided onto the two sides of the record with no breaks, and even a rare single was released from it.

Coming from near Milan, Pholas Dactylus were formed around 1972 by the guitarist Eleino ‘Lello’ Colladet, from Vimercate, coming from the local group Macus 67. He assembled the group starting with bass player Rinaldo Linati and adding Valentino Galbusera and Giampiero Nava, coming from another small local group, I Puritani (which also included two future members of Dalton). Last to enter were the second keyboardist Maurizio Pancotti and poet/composer Paolo Carelli, whose lyrics were recited by himself rather than being sung.

The first representation of Concerto delle Menti came in the winter of 1972, in Cornate d’Adda. The group had a very good live activity, supporting the German group Amon Düül II and even playing in some open air festivals, and their LP came out in 1973 on the Genova label Magma.
The musical background is intense and mesmerising in some parts, even if the spoken parts can be boring at times. An interesting record and surely worth a listen. The nice cover was made by Caesar Monti.

The group split around the end of 1973, due to some health and financial problems, a shame after the nice reviews of some music magazines.
(source: www.italianprog.com)