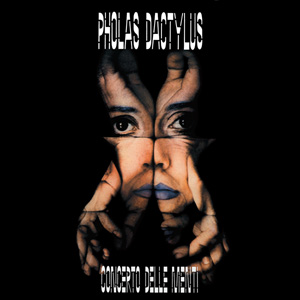 There isn’t probably a single fan of Italian Progressive Rock in the world that has never heard of Pholas Dactylus and their only opus (not just a simple ‘record’, in fact) “Concerto delle menti” (Concert of the minds), originally published in 1973.

The group was founded in 1972 on the initiative of guitarist Eleino ‘Lello’ Colladet who, starting from bassist Rinaldo Linati, then added Valentino Galbusera and Giampiero Nava from I Puritani (a band that included future members Dalton) to the line-up. Finally, with the arrival of keyboardist Maurizio Pancotti and poet/composer Paolo Carelli, a final six-piece was completed: these six people were the authors of a unique and incredible album.

‘Surreal’ is probably the keyword of this LP, a term that perfectly suits Cesare Monti’s cover artwork and the lyrics declaimed by Carelli, while from the musical point of view we’re facing a hard-jazz-prog rock continuum lasting over 50 minutes, cut in half just to be poured on the two sides of a vinyl record.

A unique and inimitable masterpiece – no potential imitator has ever tried anything like this! -, “Concerto delle menti” is exclusively reissued by AMS Records: the first edition of 500 copies comes in clear blue vinyl, and includes a 60x90cm reproduction of a wonderful original poster of that era! Not to be missed!!!