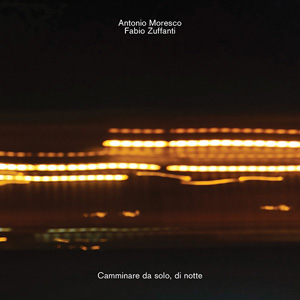 The artistic union of two apparently distant characters has given life to a unique work of art, different from anything that AMS Records has released in over ten years of activity. Fabio Zuffanti – author, musician, producer – finds here another way to express his unstoppable creativity, thanks an intuition that led him to collaborate with Antonio Moresco, one of the greatest contemporary Italian writers.

The two worked on an unpublished story by Moresco, entitled “Camminare da solo, di notte” (Walking alone, at night) and narrated by its own author, accompanied by Zuffanti with a suite that combines electronic prog with cinematic and nocturnal atmospheres, whose sounds evoke the most ethereal Sigur Ros together with the minimalism of composers such as Brian Eno, Philip Glass and Steve Reich.

“Camminare da solo, di notte” is first and foremost the soundtrack of the itinerant theatrical show “L’uomo che cammina” (The Walking Man), directed by Leonardo Delogu and Valerio Sirna, interpreted by Moresco himself and staged by DOM-, and is today also an album consisting of a single 43-minute long track; a completely new and unusual project for Moresco, which transforms a ‘normal’ album into a narrative work while, at the same time, Zuffanti translates Moresco’s words into music.