BEYOND THE LIFE (Oltre la vita) 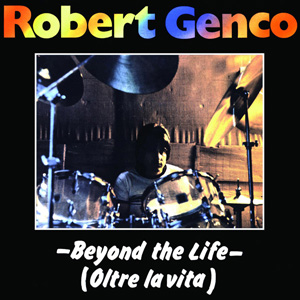 1.Angoscia
2.Beyond the life
3.All recomposes
4.Nature and transmigration
5.Passaggio

1977: was the year in which Italian Progressive Rock was closing its vital cycle, though there were still two masterpieces of its kind to be released: one is the famous Locanda delle Fate’s LP, while the second was left for too long in the vaults, as it has never been reissued for almost 40 years: we’re talking about Robert Genco’s “Beyond the life”.

Given that the drummer Robert Genco must not be confused with Robert Genco of ‘Genco Puro and co, “Beyond the Life” is a wonderful prog rock album, where the drummer blends Italian prog, with an ultra-sophisticated jazz-rock. The influences are kaleidoscopic, with the opening track (Angoscia) that runs through the streets of jazz prog at its best: James Senese and Napoli Centrale, Osanna, but also Perigeo. The title-track “Beyond the Life” could almost be described as a tribute to the PFM, while “All recomposes” is prog rock close to Yes and Genesis. The B-side is a long suite which summarizes the influences cited before, by adding flavors of Chick Corea, Dedalus, Canzoniere del Lazio, but with an extremely progressive drumming.
A gem of rare beauty, finally rediscovered!