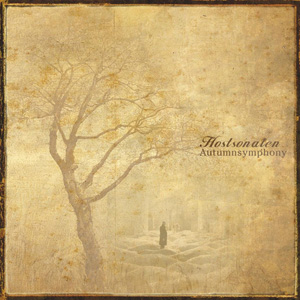 1.Open windows to autumn
2.Leaves in the well (Including Riverbank prelude)
3.Out of water
4.Nightswan I
5.Nightswan II
6.As the night gives birth to the morning
7.Trees in November
8.Elegy
9.Autumn's last breath / The gates of winter

Höstsonaten is one of the many Fabio Zuffanti projects. Fabio is one of the most creative and active Italian musicians of the last 15 years, band leader in groups such as Finisterre, Maschera Di Cera, Quadraphonic, laZona, Aries and with a solo career under his name. Zuffanti gave life to Höstsonaten in 1996, becoming the leader and only composer with the aid of many musicians friends.
Höstsonaten’s music is inspired mainly by nordic prog rock style with jazzy, folk, ethnic, and classical flavours.

After the first two albums in 1996 and 1998 Fabio decided to create a large project in four albums: a ‘musical painting’ in four movements dedicated to the four seasons. The title of the whole opera is “Sesasoncycle Suite”.

“Autumnsymphony” continues his trip through the seasons representing the 2nd part of the Suite.
In this album the melancholic feeling, that will reach his top on the winter chapter, gives life to many moments of pure musical poetry. The music seems often like a lost soundtrack of some Andreij Tarkowskij’ movie, a very important director and one of the greatest inspiration for Fabio’s music and life.
The jazzy influences (mainly British jazz, the one of groups such as Nucleus), more evident in this album, are unite with a chamber music mood. The acoustic instruments (violas, violins, cello, trumpet, double bass, etc…) is often supported by a rock rhythm section with great mellotron and moog sounds.
The voice, for the first time in the ‘Sesasoncycle Suite’, flies high and brings the autumnal vortex to the winter spirals, falls deep in the abyss and leaves the listener alone with his emotions.