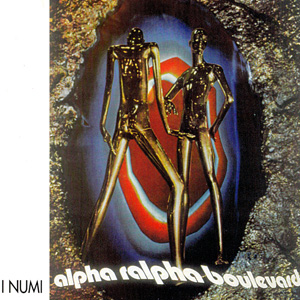 A band from Pavia formed around 1967 from the ashes of local beat groups Gli Spettri, I Solitari, Gli Imprevisti, they only released an album in 1971 for the small Polaris label (the same as I Teoremi).

Alpha Ralpha Boulevard nowadays is considered a minor Italian prog classic, is housed in a very nice cover, while music is song-based, with soft and dreamy atmospheres and good lyrics by composer Guido Bolzoni. Influences are evident in the guitar playing of Mario Rognoni (nicknamed Carlos for his ability in playing in Santana style), but the band’s sound has a strong, typical Italian melodic songwriters vein. Instead of symphonic pomp, I Numi focus on straightedged plots, based on the interplay between guitar and spinet, the excellent drumming, while lyrics mainly dealt with human condition, and an overall sad melancholy. They supported acts like Banco del Mutuo Soccorso, Patrick Samson, Franco Battiato and The Renegades.