ALIVE IN THEATRE – THE RIME OF THE ANCIENT MARINER CHAPTER ONE 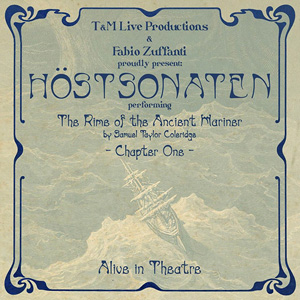 DVD:
The Show
The Backstage

The great dream of Fabio Zuffanti since he began writing the music on Samuel Taylor Coleridge’s poem “The rime of the ancient mariner” was to transpose the whole opera in a theatrical version, giving people a version that could visualize its magic words and music. Thanks to the meeting with genoese director Susanna Tagliapietra, author of the great achievements in the field of the musical with her versions of “Aida” and “Jesus Christ Superstar”, the dream has become reality.

Susanna has helped to bring alive the musical world of Zuffanti creating a multimedia work and reproducing on stage the supernatural universe of Coleridge with multimedia elements, dance and stage actions. The first of the show was held last December 16, 2012 in the prestigious Teatro Verdi in Genoa getting a great success.

From that evening comes this double album, containing a DVD with the shooting of the show (and a funny backstage) and a CD with the audio recording of the evening. Compared to the studio version, published on CD last year, the theatrical version contains many new arrangements and a brand new piece (“Interlude”).