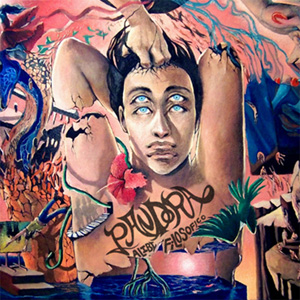 Pandora are back! The band from Piedmont, among the most devoted to the prog-rock sound of the golden years, and therefore loved by fans of the genre, comes today as a trio, composed of two keyboard players Beppe Colombo and Corrado Grappeggia – the latter singing too – and the multi-instrumentalist Claudio Colombo, whose work is on this disc is literally awesome, given his ability in juggling all over drums, guitar, bass, flute and other instruments.

They use to say that the third album is a crucial one for a band: with “Alibi Filosofico” Pandora takes a complete risk, making the most complex work of their career, without any simple commercial expedient. The mixture of various musical genres is here in full, in the purest progressive spirit, and is reflected in the surreal album cover and in the rest of the artwork, courtesy of the young artist Emoni Viruet, also committed to choirs and vocals.

The album has a number of important guests, including Dino Fiore (Castello di Atlante), Arjen Lucassen (best known for being the mastermind of the Ayreon project) and David Jackson (Van Der Graaf Generator). The latter, in particular, makes a significant contribution, not only with his saxophone, but especially with the use of a system, invented by Edward Williams, named Soundbeam & Switches, that can generate sounds from simple gestures and without the use of a real musical instrument: Jackson uses it to bring young kids with disabilities in the Meldreth Manor School closer to music, and the result can be heard in the song “Apollo”; this and the next “Tony il Matto” (Tony the Fool) are the most experimental tracks, often suspended in between jazz-rock and avant-garde. Other important guests are bassist Leonardo Gallizio and Duilio Mongittu – the voice of Apollo.

A timeless album, destined to leave its mark.