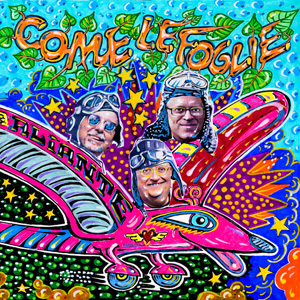 Come le foglie was formed in Milan around 1968, their early repertoire was full of covers by the likes of CSNY and Joni Mitchell, and the band had an intense live activity and a good following in the Milan area.
At the turn of the seventies, the group began creating their own sound, often helped by guest musicians, but still keeping their initial West Coast feeling. Among their helpers were horn players Riccardo Luppi and Renato Rivolta and percussionist Marco De Palma.

They were invited at many important open-air festivals in the North of Italy, and had the chance of supporting some of the top Italian and foreign artists of the time, Osanna, PFM, Banco, Franco Battiato, Alan Sorrenti, Curved Air. Of course many record companies were interested in signing them, and they recorded many demo tapes, but unfortunately their uncompromising behaviour caused them to lose any chance of a recording deal.
In the summer of 1972 the band played some concerts in small venues in England, one of the very few Italian bands to have such a chance, and could even support Magna Carta and had a broadcast on a local radio.
(source: www.italianprog.com)

The band split in the mid 70’s, while their studio recordings never found their way to an LP until today, as we have carefully cleaned and remastered 7 songs directly taken form the demo tapes from the past.
Not enough, the band decided to reunite for the AMS label and under the direction of Claudio Fucci they recorded another 8 tracks (many of them being lost songs from the seventies). So the CD is packed of 16 past-to-present tracks that show the enormous skills of a band that would have deserved much more in the past.

The marvellous artwork of this deluxe papersleeve CD was provided by the famous psychedelic cult-artist Matteo Guarnaccia.